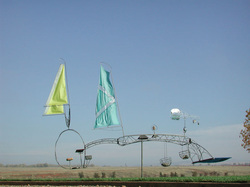 Born in St. Louis, Missouri in 1946 into a family of eight children, Phill experienced a childhood filled with exploration. He traveled to parks, museums, historical monuments as he toured the country with his family. Phill’s family finally settled in California, where the climate and culture continued to nurture his early experiences. Resulting from this broad and fortunate exposure, Phill developed his keen sense of curiosity and wonderment, particularly for the visual. These experiences laid the groundwork for his early twenties, when he lived and traveled extensively through Europe. His then well-developed passion for discovery found him scouring the museums, cathedrals and cultural events of the continent, including Italy, where he met his first of two Muses, Leonardo da Vinci.

Returning to the United States, as well as following his heart, Phill enrolled in Louisiana State University, graduating in 1973, with a degree in Sculpture, with an emphasis in Applied Design.

It was there that Phill became intimately acquainted with the works of his second Muse, Alexander Calder. Shortly after graduation, Phill returned to Sacramento, CA with his Louisiana bride, Sue and opened a sculptural design business.

In the ensuing thirty-plus years, his studio has operated on a twofold approach. First, as a design/build endeavor, it has provided a vehicle in which to create and manufacture commercial signage; restaurant interior elements; mechanical display; and ornamental architectural metals.

Secondly, by investing the proceeds from the design/build venture into fine arts component of the studio, Phill has devoted his talents in developing wind kinetics, sculptural furnishings, as well as contributing diversified studio sculpture to parks and other public facilities. Over the years, Phill has been the recipient of several national awards for ornamental and animated displays, along with national and international awards for kinetic public art and sculptural environments. Those wanting to see Phill’s work up close and personal may visit his studio located in the village of Fair Oaks, California.